Nissan Armada, the 2017 version, can only be described as a strong SUV that is as capable as the Patrol and features all the conveniences you expect from modern times. This SUV got a redesign that marked one year off the car market but the wait was definitely worth it. The new 2017 Nissan Armada is strongly based on Patrol, thus increasing off-road credibility. Obviously, it will not be perfect for everyone but it is surely a great choice for those that are mainly interested in muscle and space.

When comparing with the last version of the Armada we can say that almost all is new. However, we still have the main selling point of the 2015 model in place: capability, trailer towing and people hauling power.

Since 2 years passed since the last rendition of the Armada, it should come as no surprise that the engine is a lot better. We have a V8 5.6L upgraded engine that is more dynamic and offers a more controllable handling. 390 hp becomes available with a flat torque curve. The gearbox is 7 speed automatic, with maximum torque improvement present in gear 1 and 2. Transmission will be smooth and Armada now has optional 4WD.

2017 Nissan Armada has a lot of muscle but fuel economy is not that great. 16 mpg combined in 2 wheel rear drive is simply not something people will love. 13.5 mpg in the city is often reported.

One place where 2017 Nissan Armada shines is the upscale interior. The base level is really well-equipped and the materials used inside are high quality. The windshield standard is acoustic glass and the entire interior feels like the Infiniti, luxury version. 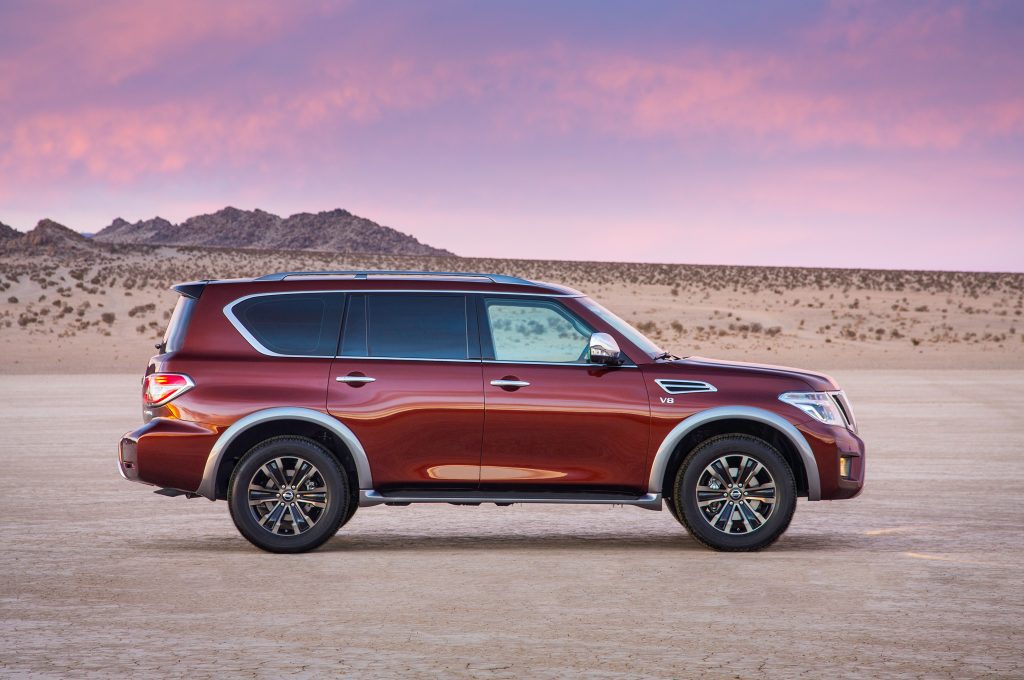 The modern SUV buyer is interested in infotainment and Nissan seems to know this. The new system by Nissan offers the cameras you want, advanced safety equipment, a good touchscreen with navigation and various extra packages that can be bought. Seats will be comfortable and offer different adjustment options. Row 2 is similar to QX80 and row 3 is definitely going to be mostly great for the children, although they will stay comfortably.

When analyzing cargo space we can say that we have less than with some of the competition but the area itself is more useful because of the design. If you fold both seat rows you get 2,701 liters of space. This is definitely a lot, even if average for this SUV segment. You do get a lower loading deck though, which makes it easier to get things in or get things out.

2017 Nissan Armada does not have a truckish ride quality or road presence. The chassis is modern and offers smoother handling. The ride is quiet when you drive on the highway or on pavement. While the SUV is not smooth like the crossover, in this section of the market you will surely appreciate what is offered. While some may think ground clearance is not that great, the protected undercarriage is strong and offroad testing shows great capability.

On the whole, the 2017 Nissan Armada is a great SUV that is highly attractive and that will be really good for a family that wants that occasional third row while having the necessary money to buy it. After all, this SUV will cost over $45,000 in most dealerships.