Outwardly the 2012 edition of the Discovery 4 keeps intact its design. Except for the alloy wheels of 19 inches that premiered the version HSE, the highest range, as standard equipment. For the rest of the range it is also possible to incorporate, as an option, 20-inch wheels with 5 spokes and integrated roof rails in satin black finish. The Discovery 4 measures are 4.83 meters in length, 1.89 meters in height and it is 2.18 meters wide.

Inside in the Discovery can travel up to 7 people. But this is possible only if we opt for the pack of 2 additional seats priced at 1 750 euros. This third row is positioned in a plane slightly higher than the rest of the floor of the cabin. But if you decide to fold the third row, it forms a flat surface. With the 7 seats deployed we still have useful 338 liters room for luggage. If the last two rows are folded down it passes almost 2 000 liters.

As in the case of the exterior, there are no great changes within its interior. They have introduced new controls on the steering column with chrome bezels and a new design of the ignition key. It is more ergonomic and comfortable to carry now.

They highlight the added functions to the equipment to make life on board even more peaceful, as the function “Timed Climate”. This is a system that preheats the passenger compartment and the engine quickly when the conditions require. The audio system and the navigation system are also new. The basic stereo unit and incorporates 8 speakers and a color screen. It has Bluetooth connection, DAB and USB / iPod. In the equipped versions the speakers are up to 17 and offer between 380 and 825 W power. The sound system for the rear seats is regulated through the wireless headphones or the remote control. This is possible thanks to the advanced technology WhiteFire. It has inputs for the connection of game consoles and playback of MP4 files stored on a USB device.

There is no shortage of entertainment systems in the rear seats that feature DVD, the disc is loaded from the sound of the front fascia, and the wireless headsets. 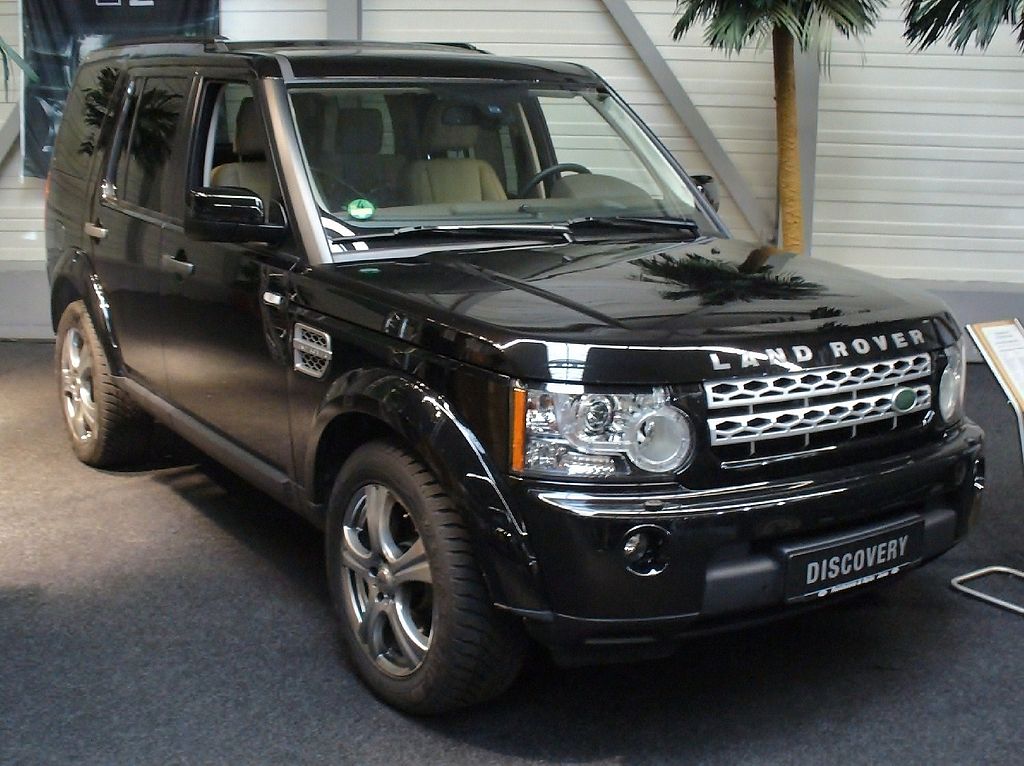 By Thomas doerfer (Own work) [CC-BY-3.0], via Wikimedia Commons

Land Rover Discovery 4 focuses on the offer of the single engine.   The 3-liter V6 Ford of origin is associated to an 8-speed automatic transmission. In its most powerful version it provides up to 255 hp at just 4 000 rpm with a maximum torque of 600 Nm at 2 000 rpm. These are the same figure as in the previous version but with the difference that now they are more equitably divided in the whole usable rev range.

This engine has two turbochargers that operate in sequence. In this way only one of them works, medium size and with variable vane geometry, when the demand the accelerator is not high.  At the moment when more power is needed the leaflet valves open passage ducts to the second turbo. It is of a smaller size. This process enhances the stretched. This enables a better fuel efficiency and significantly lower CO2 emissions. The direct injection is by “common rail” 3rd generation which operates at a pressure of 2 000 bar.

The sophisticated gear box of 8-soeed can be sequential operated from the steering wheel paddles. A curious detail is that in certain cases, when we demand to its highest levels of engine torque, we can skip automatically up to 6 gears at once without waiting for our intervention.

The permanent AWD (All-Wheel Drive) System, independent air suspension and a revised Terrain Response are the basis of the good performance of Discovery 4 on asphalt and beyond.

The first thing that attracts attention is that the drive is missing the traditional gear lever. Instead, in addition to the cams behind the steering wheel, we find a knob of selection that emerges from the flat of the central console when we start the engine.

With the injection of power received, the Discovery 4 has gained agility. Although, the swinging of the bodywork is present in sharp turns and the changes of strong support are quite balanced. You should consider its height and its more than 2.5 tons about that.

The engine response is smooth but in continuous ascension. This is something that is appreciated in terms of the ride comfort. Its off-road skills continue to be outstanding.

There are airbags at the front for the driver and the front passenger, for the heads for the first 2 rows and at the front sideways. There are also different systems like:

It provides assisted steering speed sensitive, reductions and decrease control with speed regulations. The jewel in the crown is the Terrain Response System. It allows us to tailor the response of the engine, the gearbox and the suspension to the type and the condition of the pavements.

Moreover, the 2012 Discovery 4 keeps intact the qualities of its predecessors. It is a vehicle that has a luxurious and spacious interior. It shows a response to all sorts of signs that it is very noble and balanced. It moves with more fluency over asphalt with the improvements made in the engine. It can claim to be an SUV with capital letters.