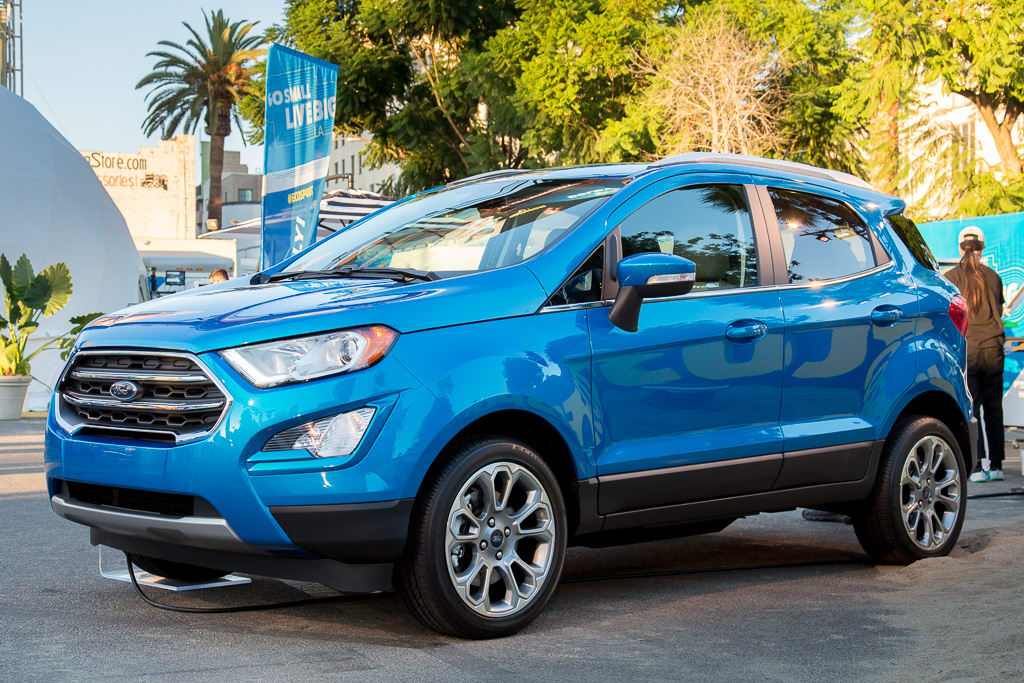 Out of all the automakers introducing subcompact SUVs in USA, Ford was among the last but it did manage to pull off a new thing. 2018 Ford EcoSport is imported from India, a country where this model is quite popular. Ford will be able to sell the EcoSport in America with a starting price close to $21,000, leading to a pretty good profit. Small vehicles do not often manage to achieve this for manufacturers.

The subcompact SUV market is really competitive. It is filled with various entries that are very strong like the high selling Kia Soul, the Chevy Trax and the popular Honda HR-V. Ford 2018 EcoSport manages to offer connected, capable and fun driving experiences that will be perfectly combined with a lot of technology.

2018 Ford EcoSport did end up being reengineered for the looks and duty needed in US. The result is similar in design with the Ford Escape, but at a smaller head version. This SUV is small and does aim towards empty-nester and single scenes. You do get a lot of free space in the front seat area but you do need to pull the seats up when you have people in the back. This might get you in an uncomfortable area as you would be a lot closer to the dashboard than you would like.

When looking at the trunk we can say that it is pretty impressive. Tailgates open like doors and does not lift up. This is a design system that is not that common in the US but pretty common in other countries. Swing-gate-style tailgates are included in all the EcoSport models. The only problem with this tailgate system is that there are no stops as with passenger doors. When you let it go, it will start to close. Wide berth is necessary as you parallel park so if you have any cargo, parking in smaller spaces will not be possible.

Speaking about performance, the 2018 Ford EcoSport will include the 1 liter 3 cylinder Turbocharged EcoBoost or the 2.0 liter 4 cylinder 4WD engine. There is much control and power that is gained with both engines. Front wheel drive will be standard in the 1 liter engine. Although a 3 cylinder engine can sound pretty weird, you get 123 hp, which is as much as most people need. The fuel economy of 29 mpg on the highway is what you will really like, being exactly as much as the 4 cylinder 166 hp model offers. Tow ratings are of 1,400 and 2,000 respectively. This is a lot.

This SUV is modern so it is a little weird that the steering is rubbery and vague. You can get used to it and you will like the suspension though so it might not be a problem. The cheap cars made by Ford are definitely really good so it should be no surprise that this ride is really cushy. Potholes will not be a problem and on the highway, the car is surefooted and really quiet.