In this occasion, the tested version is called S FX30d. This model is with a six-cylinder engine that offers 238 hp, associated with a seven-speed automatic transmission. This is similar to the Nissan 370Z. This combination is of 63,650 euros. This is a very competitive price compared to some of its potential opponents. Keep in mind that the FX offers a very complete equipment standard. While its opponents start from a lower start price and equal equipment.  The opponents are Audi Q7 TDI Clean of 239 hp, BMW X5 xDrive30d of 245 hp, Mercedes Benz ML 350 CDI of 224 hp or 239 hp for the Porsche Cayenne D CV. They exceed the barrier of 70,000 euros.

It should be noted that the Infiniti FX opponents may include a very reliable packet destined for off-road circulation. This is not possible for the FX, because it is designed for the road. Also, the X5 or Q7 may offer an optional third row of seats fold. This does not occur in the Infiniti.

The Infiniti FX this denotes premium quality and a correct assembly when you enter it. The interior is spacious. The driving position is comfortable and the rear seats are spacious. However, the column of the transmission is so prominent.

One of the aspects that penalize the Infiniti FX in relation to its rivals is the boot capacity of 410 liters. The car’s sporty design that drops the back of the roof subtracts capacity. The sporty figure makes you be far away from the 775-liter capacity of the Q7.

The Infiniti FX30d S offers a driving position not as high as that of an SUV. The feeling when you ride it for the first time is like you make less effort compared to their opponents. After you are seated the steering column remembers that. The instrumentation is read correctly and all the controls are within reach. Exception makes the disconnection of security features such as a notice of involuntary change lanes or stability control. They are located in the lower left of the dashboard.

The display of the onboard computer is between the speedometer and tachometer. It is smaller and has fewer features than its rivals Volkswagen Touareg, the Q7 or the Cayenne.

One aspect in favor of the Infinity is the fixing of the position of the cams changes. We always know what the position of raising and lowering gears is. This way they stay fixed and are not integral with the steering wheel. This is useful in tight turns in the mountain port roads. The cams are exactly the same as those of the Nissan 370Z. 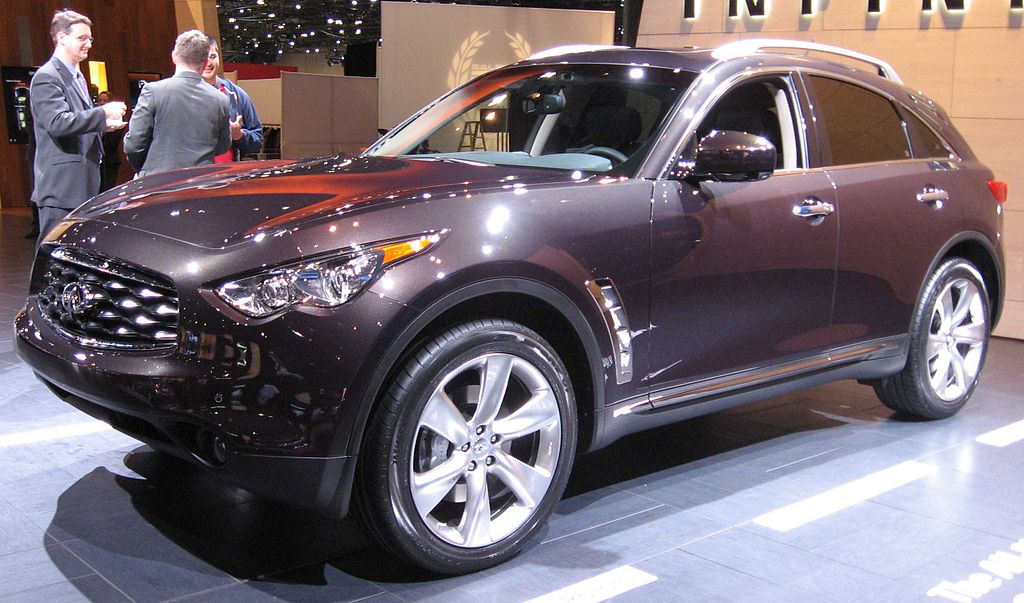 The tested FX rides a six-cylinder engine of 238 hp. This is associated with a seven-speed automatic transmission. This engine is an old acquaintance of the Renault-Nissan alliance. It is used in models like the Nissan Pathfinder or Laguna.

The benefits from the FX association surprised us pleasantly. First, because the vehicle is comfortable, quiet and responds to the accelerator pedal if you need to advance in highway. Second, because it is a lot of fun to drive it in the mountain roads.

Automatic is when you put the lever in position D. Sport – if we activate Sport-Normal key which is located behind the lever. Manual or sequential is when we activate the shift lever or the paddles on the wheel.

During the test, we performed a mountainous section of 50 kilometers. In Sport position and driving the steering wheel paddles for raising and lowering intercourse. The response of the engine at low engine speeds was good. The ability to accelerate enough to move a vehicle of this size was good as well.

And finally the best is their agility and stability in changes of direction at speed corners. The carrier does not swing too much and the steering is direct and precise. Even when it enters a wet road the stability control is activated as soon as it enters the wet area. We should also note that the brakes did not accuse tiredness at any moment.

The FX is a model designed for a road drive and it shows in this agility. It is not in vain that it shares a platform with the Infinity G which Is a conventional saloon.

The Infiniti FX 30d suspension absorbs firmly the terrain irregularities and Rear Active Steer system contributes to an increase in the stability. This system operates as follows:

– Between 40 and 80 km / h they are displaced slightly at the direction of the front wheels;

– At speeds above 80 km / h in turns mild and the rear wheels are running the movement.

You can see this system in other vehicles such as BMW 7 Series. But at this model at low speeds the rear wheels turn in the opposite direction to the front. This way facilitates the parking, for example.

We did a test at a distance of 150 kilometers 50 of which mountain road, 80 km – motorway and 20 km – urban section. The Infiniti FX needed 10.1 liters of fuel to an average speed of 75 km/h. During a test at a distance of 150 kilometers, with 50 mountain road, 80 km of motorway and 20 km of urban section, the Infiniti FX 10.1 liters of fuel needed, to an average of 75 km / h. This figure is higher than average in liter and half to its rivals. FX does not mount regeneration systems that help to reduce fuel consumption. The Start & Stop system reduces spending fuel in urban sections. In terms of consumption, an interesting option is the VW Touareg Hybrid.

We tested in an exclusive section of the highway. The average speed was 110 km/h and got a fuel consumption of 7.4 liters. In the same section the Q7 needed 6.9 liters.

The FX equipment is quite complete in the S model. All safety systems includes:

– The camera peripheral vision we have at the front, the side and the back of the vehicle.

This system is associated with the display. This is an additional cost of 2,620 euros. Other standard features are:

– The upholstery is in leather,

The price, the performance and the equipment are really good when compare the Infinity FX to its opponents. However, if you often need to travel off-road terrain, this is not your car. The Q7, X5, X6, and the Cayenne are more creditworthy at this point. The FX has intelligent traction to all four wheels. This allows us to travel on gravel roads at good condition, but not on rough terrain. The feeling of driving the FX is good and is agile. The only negative feature for the FX is that it needs more fuel than its competitors in the same driving conditions.