In its 2011 range the Freelanders has received a new front bumper with very bulky forms and an incorporation of fog lights. It has got a slightly redesigned radiator grille and new rear lights and front halogen headlights. The rear light clusters incorporate a semitransparent cover type “Lexus”. The alloy wheels of 17 inches in this model are an innovation as well and the mirrors have 10% more glass.

The brans had also the chance to update the logo with a new color. The square shapes with rounded edges of the body of the second generation of Freelander remain unchanged. This is with respect to the design presented in 2006. It is a line that approaches this model much closer to its high-end siblings.

Its compartment is equipped to accommodate up to 5 adults retaining a load capacity of over 400 liters capacity. The Freelander 2 is one of those cars that leave you a good impression concerning ergonomics and spaciousness of the compartment. There is enough light, it is airy and provides great visibility. Only the passenger in the center of the second row may complain. Because their support which hides a retractable armrests is hard. The foot space is also somehow reduced.

Indoors and at the dashboard we find many holes that carry things and places where you can leave soda cans or bottles. A curious detail is that they are designed a way that if the container has a handle, the hole for this one has also been taken into account.

In the front seats the space is broader. There is no center glove as intrusive and annoying at the elbows as in the case of his “brother” Discovery.

In versions 2011 of the Freelander, Land Rover has included four new styles of upholstery, trim and dashboard. Four are also the terminations, E, S, SE and HSE. 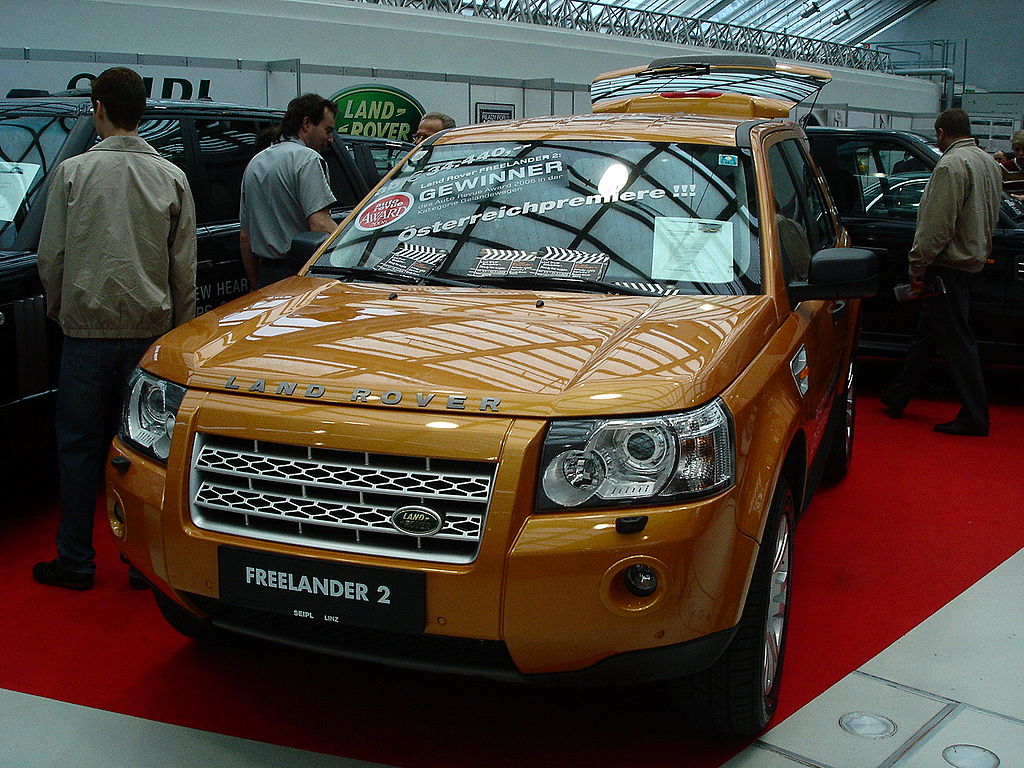 By Michi1308 (Own work) [Public domain], via Wikimedia Commons

The 4-cylinder 2.2 liter of 150 hp that animates this model is new. It features variable turbo geometry, water cooler, and common rail injection with high-speed piezoelectric injectors and complies with standard Euro 4 and Euro 5 emissions. Goes in transverse arrangement in the engine compartment. It replaces the previous 4-cylinder engine bloc while giving 10 hp more. It offered worst figures of torque, 400 Nm against 420 now, and the consumption and emissions are higher.

It is an engine that begins to stretch above the 1,800 rpm and which up from there shows a great elasticity. This combined with a manual change of six relations very easily takes advantage and gets good consumption records. The British brand announced in this sense has a consumption of an average 6 liters per 100 km. This is 0.2l less than the 4×4 uses. In our case we obtained 7.1 liters. This is a pretty good figure in its sector taking into account that the Freelander 2 4×2 is a car of 1 710 kg. Its acceleration in the 0 to 100 km/h is estimated in 11.7 s and its maximum speed is 181 km/h.

It cannot conceal that its front end is the one which commands. This is especially noticeable on hard acceleration. We notice that even the direction inclusion “pulls” and become slightly less precise. Also being a high vehicle with suspensions, if you travel more a certain body roll is appreciated. In the urban helmet its broad field of vision and platform height helps a lot in maneuvers and you can see over many cars. It is 4.5 meters in length and is not easy to park.

On the highway the whole suspensions, front and multilink back ones of the type McPherson, result firmly in its first few inches of traveling. But they soften as the rolling inertia appears. Its gearbox of 6 relations favors that we can keep the engine always in its best torque levels. Its sixth enables levels out on the motorway with the engine very low in laps. The first cut is a great help when tackling areas without asphalt.

It is well equipped in sense of security. It incorporates ABS with the latest generation of EBD (Electronic Brake Distribution), EBA (Electronic Brake Assistance), concerning brake corrector CBD with power of control over under steering. It has ETC (Electronic Traction Control) and Dynamic Stability. And logically, there is no lack of a broad range of airbags. The 7 airbags are scattered around the cabin. There are up to the driver’s knees as well. The seat belts are with three anchor points. It also has 2 Isofix fixations. Than three points in the rear seats.

The Freelander 4×2 is pretty much the same as its namesake 4×4. For the brand differences are in the lowest price, the more moderate consumption and the weight, which is about 80 pounds less. Land Rover announces 6 l for 100 km against 6.2 for the 4×4. We should clarify that this version, as fitted to the entire manual gearbox, is standard with the Stop & Start System. This system stops the engine in prolonged stops and it starts up again in a step on the clutch. The Freelander 2 was the first vehicle of the British brand to incorporate it and also the first in its category.

Although it has a slothful response until it reaches 1 800 rpm, the engine of the Freelander 2 is the kind that captivates you. The Freelander 2 4×2 is a vehicle that will always go farther on a snowy road or a muddy track. It is a conventional passenger car thanks to its height, wheel size and its unibody preserves intact its good off-road dimensions. In conclusion, it can pass 960 km. with its 68-liter tank. That means around 130 km. more per deposit than what we obtained when we tried the 4×4 variant with the same engine.